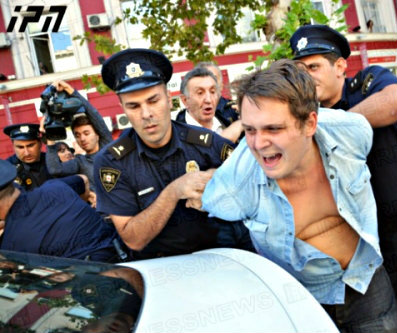 Youth activists who want Saakashvili back in power clashed with his opponents Thursday. (Interpressnews.)

TBILISI, DFWatch–Opponents and supporters of former President Saakashvili clashed again in Tbilisi on Thursday, two days after their first showdown.

The two rival political youth groups stood against each other on Pekini Street, cursing opponents and throwing bottles, eggs, condoms and even a broom.

The showdown started when dozens of activists from the conservative youth group Tavisupali Taoba (Free Generation) gathered outside the office of Tavisupali Zona (Free Zone), to protest against their beating of a Asaval-Dasavali journalist on Tuesday.

One activist from Tavisupali Zona, a group known for fiercely agitating for a return to power of Mikheil Saakashvili’s National Movement, has been arrested in connection with the beating, but Taoba insists that there were more then ten perpetrators, and demands their arrest too.

Zona and UNM members, several MPs among them, stood at the entrance of the office, defending it.

Soon, the number of people on both sides swelled to several hundreds, blocking the traffic on Pekini, one of Tbilisi’s main streets.

The police made a line between the two groups, and this prevented them from clashing together, but the two groups pummeled various things at each other: water bottles, condoms filled with water, eggs and some other objects. One member of Tavisupali Taoba hurled a broom at the other side and was detained by the police.

Afterward, Zurab Bigvava, the young man who threw the broom, said that it was a symbol of the National Movement, referring to the infamous videos which emerged in September, 2012, depicting, among other things, brutal mistreatment of an inmate by prison guards using a broom.

The videos were released just before the 2012 parliamentary elections and are thought to have made a singificant impact on the outcome, boosting Georgian Dream support. Afterward, opponents of the Saakashvili government often used brooms during demonstrations to heckle the UNM and their supporters.

Zaza Davitaia, a journalist for the conservative and sometimes homophobic weekly Asaval-Dasavali, was present at the rally too.

While Tavisupali Zona is openly pro-UNM, its opponents have not shown overt support for the Georgian Dream coalition, although Zona and UNM members accuse it for being pro-Georgian Dream.