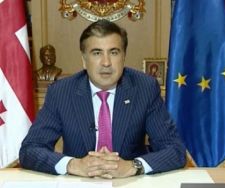 Before leaving, Saakashvili held a last televised address from his palace. He thanked people for giving him the opportunity to serve the country as president twice and talked about various time periods and events during his presidency.

“Let’s forget our political reality for a while. Let’s for a moment forget our disputes, confrontation, polemics and think together about what the last ten years have changed, what it has meant for us, what it was preceded by and what it will be followed by,” he said. “I want you to ask yourselves: are we now better than we were ten years ago? Did we manage to change the country to the better?”

He recalled that during his presidency problems were solved, starting with providing people with round-the-clock electricity and reducing the level of crime.

“We created a new form of patriotism, returned national pride, which unites instead of separates and if you want to be proud of being a Georgian citizen, you must be proud of yourself and your country. Neither your surname nor your belief matters,” he continued.

“I don’t need to rest, but it is time for you to rest from me,” he said, continuing that he will always be with people, but from a different place.

“What I have never denied is that I will always be a proud citizen of our country, one among many others my sisters and brothers, children of our precious country.”

He said many plans are left unimplemented and the major one is unifying the country.

Saakashvili said his biggest mistake was to trust the Interior Ministry.

“I regret that often I trusted the Interior Ministry and several employees of the Prosecutors Office too much.”

The president used to call former Interior Minister Vano Merabishvili ‘the country’s backbone’. When talking about the ongoing court case against him, he calls it political prosecution.

He also admits that there were made mistakes on the way to progress, revival and to Europe.

“I want to apologize to all who became victims of injustice and humiliation,” Saakashvili continued.

He said that in an accelerated process and desire of reforms they didn’t foresee necessity to discuss own actions and agree with those who were against these reforms and changes.

“Court reform was really slow, while education reform was not necessarily deep. I take responsibility of all of this,” he said, but added that he will never apologize for desiring to return pride and strength for people.

The president remembered the Russia-Georgia war of August 2008 and said the Georgian people tolerated much that many others would not have tolerated.

“Not a day has passed that I didn’t think of those young boys whom the conquerors murdered during intervention of 2008. Let’s not throw away their sacrifice, let’s not give to conquerors what they didn’t gain by fight without fight,” he continued.

Saakashvili said his government prepared the ground for perfect relations with NATO and EU, but Georgia still has great problem with its northern neighbor.

“We must talk to them. We need peace, but not having a war doesn’t mean peace. Peace cannot be exchanged for the obedience of the conqueror and we cannot buy it in exchange of [our] independence.”

At the end he asked every citizen not to allow anyone to ‘let the sovereignty be sacrificed.’

“Don’t let Russian agents return, never decline NATO and EU. This won’t guarantee security and won’t bring welfare. This will bring chaos and will make us dependent. Only a strong Georgia integrated with the West can have peace with Russia on the grounds of bilateral respect.”