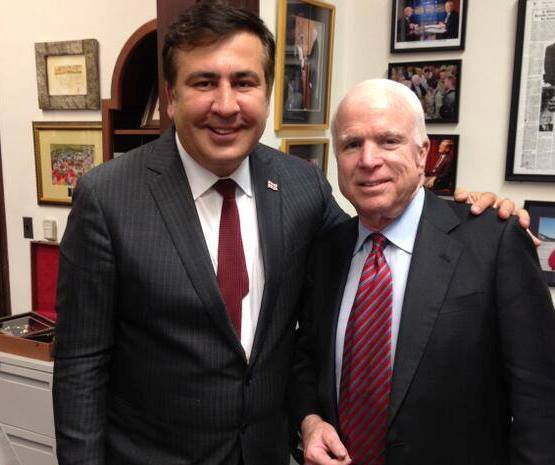 Among the around twenty politicians Saakashvili met on the Hill was Republican Senator John McCain, a longtime friend and ally.

According to his official Facebook page, Saakashvili thanked the U.S. politicians for their cooperation and asked them to continue supporting Georgia on the way to Euro-Atlantic integration and assist in getting rid of the pressure from Russia.

Saakashvili was not in Georgia on November 17, the day his successor was sworn into office, and there are no indications that he has returned home since. It remains uncertain whether he will be prosecuted, should he return to his home country. Former Prime Minister Bidzina Ivanishvili, whose Georgian Dream coalition came into government a year ago, has said it cannot be ruled out that Saakashvili will be prosecuted, and pointed to the death of Prime Minister Zurab Zhvania in 2005 as one among many cases which could lead to a trial.

One other case might be the Khurcha shooting in 2008, which new Prime Minister Irakli Gharibashvili said  will be fully prosecuted and those who ordered and organized it punished. Two former security officials have been detained for the apparent staged shooting on the day of the parliamentary election, but few believe that they could realistically have carried it out on their own initiative.

In an open letter published on Facebook on the eve of his leaving office, Saakashvili wrote that he has received several offers from foreign universities about creating a research center named after himself, but he has not specified whether this center would be located inside Georgia or abroad. Some in Tbilisi are wondering if Saakashvili’s absence is connected to his new plans, or motivated by a wish to stay away to avoid being detained.

Former U.S. Ambassador to Georgia Kenneth Yalowitz two weeks ago said bringing Saakashvili to justice could lead to a similar situation as in Ukraine, where the country is in a tug of war with the EU over its treatment of former PM Yulia Tymoshenko, which is threatening to derail the negotiations about a free trade agreement with the Union, while Russia is trying to get it involved in its Customs Union for ex-Soviet states.

In an interview with the New York Times, Saakashvili claimed that Ivanishvili wants him either in prison or in exile, but that he will fight for his right to live in Georgia as a free man.