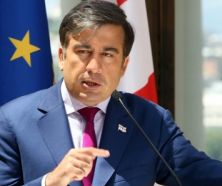 Prosecutors say instead of using the money on the SSPS, Saakashvili spent it on vacations, presents, clothes and luxury items.

In an interview aired on the TV channel Rustavi 2 on Thursday, the former leader left uncommented whether his spending had been funnelled from the SSPS budget, but said that he is not corrupt. His family still lives there where they used to live, and he himself continues to travel by metro.

The money which the Prosecutor’s Office thinks he stashed away was in fact spent on hosting guests, for keeping open his palace in Tbilisi, tourism commercials and promoting a non-recognition policy, the former leader said.

The list of expenses published by the investigation included paying GEL 33,204 for renting a helicopter in Peru.

“Do you think I was happy to go to Peru? A new president was elected in Peru, who said in the congress that they plan to recognize Abkhazia and South Ossetia,” Saakashvili said. “Peru’s recognition would have been difficult for us, so I went to Peru.”

He said he was invited to some cultural event, where there were Peruvian MPs, journalists and representatives of the president’s administration.

“Why should we have refused?”

The ex-president says that the Prosecutor’s Office shamefully also published that he has given expensive presents in countries where there was a risk that the government would recognize the two breakaway regions Abkhazia and South Ossetia, which Russia, Cuba and Venezuela have done.

“I don’t have corrupt income,” he writes. “I didn’t benefit, but the state budget increased eleven times.”

The Prosecutor’s Office on Wednesday published a lengthy list of Saakashvili’s expenses during five years, money which was taken from the budget of the SSPS, a state guard service. https://dfwatch.net/saakashvili-charged-with-embezzlement-of-security-force-money-39731 He was charged with embezzlement of state money. This is the third charge against him so far, and yesterday a domestic search order was issued to detain him if he turns up in Georgia.