KaZantip organizer to priests: ‘We have a no drugs policy’

KaZantip organizer to priests: ‘We have a no drugs policy’ 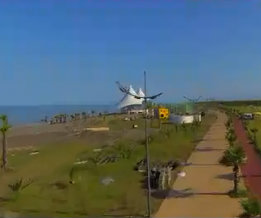 KaZantip is planned held in Anaklia, a beach resort in Georgia near the border with Abkhazia. (Palitra.)

TBILISI, DFWatch–The manager of KaZantip has offered to meet priests and conservative activists to discuss the music festival, claiming that they are misinformed.

Orthodox activists demonstrated near the festival site Thursday using biblical slogans warning of another ‘Sodom and Gomorrah’, and were joined by supporters of several opposition parties.

Later there was a counter-rally at the entrance to the festival site, called the “republic of KaZantip”, by a group of people who said they are progressively minded and do not want the festival to be canceled.

The two groups met at the Ganmukhuri bridge in Anaklia, a town on the Black Sea coast near the border with Abkhazia. The bridge is also the entrance to the festival site. None of the groups were allowed by the police to go inside.

Clerics said they plan to continue everyday prayer and demand to have the festival’s head organizer Nikita Marshunok expelled from the country.

The same day, the festival’s press office reiterated that no drugs will be allowed during the festival and that many have been misinformed about the drug ban.

Marshunok invited clerics to come to the festival area on August 20 to talk.

“They speak loudly, but they don’t know what they are talking about,” he said, adding that he is ready to inform the priests about the details of the festival.

“There hasn’t been this kind of situation around the festival before, but all of this is quite interesting,” he said and repeated that there will be no drugs.