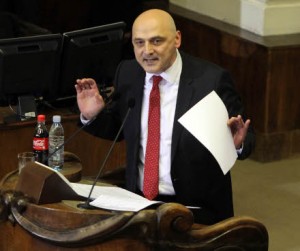 Opposition MP Jondi Baghaturia accused the family of Georgian president Mikheil Saakashvili of business lobbying. Saakashvili interrupted him, offered to order Baghaturia a round of treatment at his father's therapeutic mud bath, and then left the room for several minutes. (Photo: Interpressnews.)

TBILISI, DFWatch – There were tough exchanges in the Georgian parliament yesterday, with President Mikheil Saakashvili at one point leaving the room after recommending an opponent to take a therapeutic mud bath to get rid of his delusions.

The situation became so heated that the president left the session hall for several minutes as a sign of protest against accusations from one of his opponents, after he had delivered his annual report to parliament about the state of his country.

After the state of the nation address, time was allocated for the majority and minority, factions and independent MPs to talk.

Jondi Baghaturia, leader of the Kartuli Dasi Party and part of the faction Unity for Justice, accused the family of the Georgian president of business lobbying. 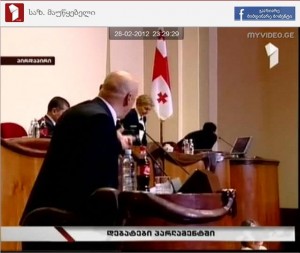 Screenshot from Georgian public broadcaster First Channel showing Saakashvili (right, with his back to the camera) as he leaves his seat while presiding the debate.

Baghaturia further said that the president’s father, Nikoloz Saakashvili, has taken over the entire spa industry. Hot baths is one of Georgia’s specialties, attracting tourists every year.

The opposition politician also accused the president of overseeing a system of elite corruption encompassing oil and minerals, the advertisement sector and the commercial TV station Rustavi 2.

The president interrupted Baghaturia’s speech, explaining that his father doesn’t own the spa in Tbilisi’s Ortachala district, but is the director.

“Rolling in the mud is your natural state,” the president told Baghaturia, which caused smile and applause from other MPs.

The president then offered to call his father’s spa, which he said was 300 meters away, and order the security guards in parliament, called ‘mandaturi’, to submerge Baghaturia in therapeutic mud of the highest quality and knead him as hard as he needed, until his delusions went away.

After having said that, the president got up from his seat and left the session hall for several minutes.

Baghaturia also promised his faction would leave the session hall, after which the president said ‘no one believes in the talk of such clowns.’ 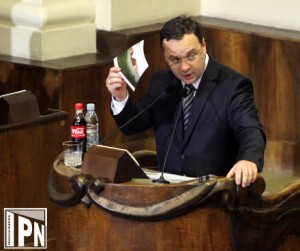 Another outspoken MP, Giorgi Tsagareishvili, also provoked a combative response from the president. He represents the Free Democrats Party, one of the allies of billionaire Bidzina Ivanishvili’s opposition movement Georgian Dream.

Tsagareishvili presented photos of the houses owned by ministers in Saakashvili’s cabinet which he claimed is infested with elite corruption. After several ministers he said that the president has been president only for the ruling National Movement party since the first day of his presidency.

The president responded to him saying that no one believes that these houses on the pictures really belong to the ministers. They don’t have luxurious houses and the Interior Minister Vano Merabishvili, Saakashvili said, is ‘still as impoverished as he has always been.’

However, he said, the current government has higher salaries than during Shevardnadze’s presidency, because there was corruption in those times and they didn’t need the salary, unlike today, where there is no corruption.

The president called Tsagareishvili, a ‘simple gaishnik’, the term for a traffic cop during the Shevardnadze period known for being immersed in a culture of bribes. He added that minister in the current time will never be able to gather the same amount of money even after several years, as Tsagareishvili did in those times.

“Bribery was their tradition,” Saakashvili continued.

“Dark passport rooms instead of houses of justice. A several month system was for taking the drivers license then and everything happened with bribery and money.”