Saakashvili reaching out to Georgian youth

Saakashvili reaching out to Georgian youth 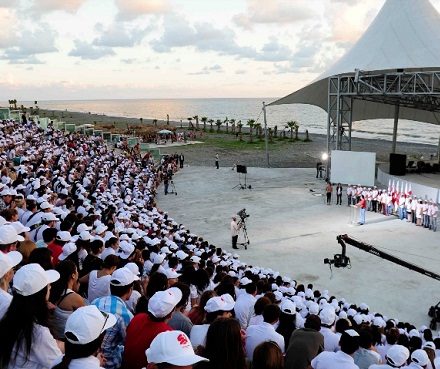 President Mikheil Saakashvili reached out to students in the coastal resort Anaklia, urging them to vote. (IPN.)

TBILISI, DFWatch – Georgian president Mikheil Saakashvili says the ruling party will have several 21 year-old candidates on their list for the upcoming parliament elections.

Saakashvili today met students who have a summer job in the small Black Sea coastal town Anaklia, saying that a majority of students will this year cast their first vote in an election, and some of them may even become members of parliament (MPs).

Along with a number of constitutional changes, the Georgian parliament this year lowered the age limit for MPs from 25 to 21. The initiators of the law explained it as creating an incentive and opportunity to youth to get involved in political activity, and to represent their own city or region in parliament.

The president has not specified who will be those youngsters on the National Movement’s list.

In his speech Mikheil Saakashvili said he didn’t come to campaign for his party, but to call on students not to let their future be in someone else’s hands.

“You will have to live a long time in this country. We should make sure so we won’t regret in the next 70-80 years that someone decided our fortune instead of us. I cannot promise 150 years, but after a hundred years we will for sure meet here in Anaklia for disco.”

The president added that Georgia doesn’t have to give away its freedom to any other political force, to any forced subject from outside.

Summer Job is a program organized by the education ministry. The project involves getting employment for thousands of students for one month in different fields all over Georgia. The project ended on August 20 and students received 500 lari or around USD 300.