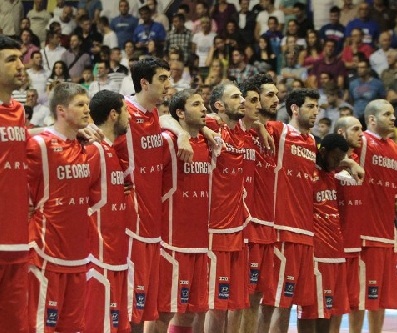 Georgia won its second qualifying match and now has a strong position in its group ahead of next year's European cup. (Photo: Ministry of Sport and Youth Affairs.)

The final score was 96:95. Georgia started first round with significant advantages scoring 20 points, but the opposing team played stronger in the second round, reducing Georgia’s lead.

Jacob Pullen from Italy was first to got 20 points for Georgian team. Viktor Sanikidze, Manuchar Markkoisvhili and Zaza Pachulia also got 19, 17 and 16 points for the team. The team won first round with 54:38. Zaza Pachulia is a professional basketball player who plays for the Atlanta Hawks in the NBA.

In the third round, the difference was reduced to a single point. But in the end, the Georgian team won the match.

This is the second victory for the Georgian team in Group D for EuroBasket 2013. They defeated Romania 80:64, while the team from Bosnia-Herzegovina was considered to be the best in Group D after defeating two teams before Georgia. But the team still leads its group as it has already played three matches, unlike the other teams of the group.

Then next match will be held in Tbilisi August 24, when Georgia meets Latvia.