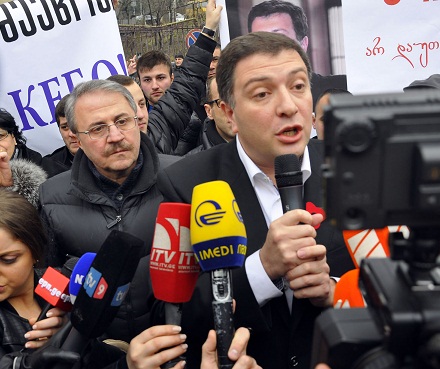 TBILISI, DFWatch–The Prosecutor’s Office wants Tbilisi mayor Gigi Ugulava removed from office and on a USD 600 000 bail as he awaits trial for money laundering and embezzlement.

Even though Ugulava, a close ally of President Mikheil Saakashvili, is an elected official granted certain immunity, Georgian law allows suspending his authority if he is accused of a crime under the criminal code and the crime was committed while carrying out his official work.

The Prosecutor’s Office also demands to imposed a travel ban on Ugulava so he can’t leave the country, as there is a risk that he might hide from the investigation.

Chief Prosecutor Archil Kbilashvili said Sunday on Rustavi 2 TV that his office is asking the court to set bail at one million lari, and in addition, Ugulava will have to appear once a week for the duration of the investigation.