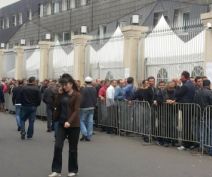 People queued outside the president’s palace to apply for a pardon. (Interpressnews.)

TBILISI, DFWatch–President Saakashvili has pardoned about 18 000 people on probation or already finished serving their sentence.

The president signed a decree which has been sent to the appropriate bodies in order to be enforced.

Andro Barnovi, head of the president’s administration, said at a briefing Wednesday that these bodies are obliged to immediately enforce the decree. He recalled that the president said August 19 that he was ready to pardon probationers and wipe the conviction off the criminal record of those who wish.

The president’s decree will not apply to those convicted of crimes against the state, deprivation of life, sexual freedom and other particularly severe crimes.

He also said that they are still receiving applications for pardon.