Saakashvili not to attend inauguration of new president

Saakashvili not to attend inauguration of new president 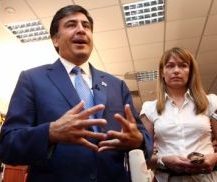 Mikheil Saakashvili is in Europe and does not plan to come home for the inauguration of Georgia’s new president. (Interpressnews.)

TBILISI, DFWatch–President Mikheil Saakashvili and other top people in the National Movement party will not attend the inauguration of Giorgi Margvelashvili as new president on Sunday.

In a statement, the UNM says their people have acted in line with ‘civil standards’, and their candidate Davit Bakradze conceded defeat as soon as election results were announced, but that Margvelashvili on the other hand said in his first statement after the election that he would not cooperate with the opposition, the UNM claims.

They further claim that Prime Minister Bidzina Ivanishvili after the election insulted people who voted for UNM by accusing them of having a ‘low political culture’, while they on the other hand respect their own voters and respect state institutions.

“However in frames when the winning political force wants confrontation instead of unity and when our friends remain in illegal detention, including Secretary General of the party, and when thousands of supporters are questioned and politically prosecuted, we think it is impossible to attend the ceremony.”

The president’s administration confirmed that Saakashvili is not planning to return to Georgia for the inauguration, but he will make a statement about it later himself. He is on a visit to Europe.

Gigi Ugulava, Mayor of Tbilisi and member of UNM, will not attend the ceremony either. He said he is mayor and institutionally has to participate in preparing the inauguration, as it will be held in Tbilisi.

He said with the respect to voters he congratulated the winner, but doesn’t plan to attend the ceremony.

Giorgi Margvelashvili from the Georgian Dream coalition will be sworn in as new president on Sunday in the yard of the old parliamentary building in Tbilisi.

The ceremony will not be ‘pompous’, according to the Foreign Affairs Ministry, and only invited guests will be able to attend.