Saakashvili: My force will govern for many years

Saakashvili: My force will govern for many years 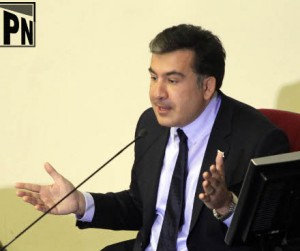 The force is with him. Georgia's president Mikheil Saakashvili said he himself will be a part of moving the country forward after he leaves office next year. Many speculate that he might remain in power as prime minister. (Photo: Interpressnews.)

TBILISI, DFWatch – Georgian president Mikheil Saakashvili says his political force ‘has the resources to govern for many years and will never refuse this.’

The statement came during an annual speech to parliament Tuesday.

Giorgi Targamadze, leader of the Christian Democrats, and representative Giorgi Akhvlediani from the same party asked him about his future plans. Saakashvili’s second term expires next year, but many speculate that he might remain in power as prime minister.

In 2010 the constitution was changed so power was shifted from the president to the prime minister. These changes will come into force just as Saakashvili leaves office in 2013.

He has never said definitely one way or the other whether he will remain in power in a similar fashion as Vladimir Putin in Russia.

Giorgi Targamadze noted that for all the twenty years of independence, there has been a recurrent problem with making the president leave power voluntarily. He appealed to the president:

“Exactly you have the historical chance to break this vicious circle and move Georgia’s development into an entirely new phase.”

He says the opposition forces are trying to assure society that Saakashvili won’t continue as Prime Minister, which might create the precondition for a revolution.

“You can change the direction to this process today and finish the endless, destructive process in Georgian politics,” Targamadze says.

“Georgia and our western allies need a clear answer to the question of what Saakashvili is planning: to the end devote the idea cultivated by him about Georgia’s exceptional democratic mission and its leader in eastern and post-Soviet space, or follow the rammed way to retain power.”

“Gain people’s support and defeat us in the elections. Don’t hope on behalf of your aunts and uncles, who will resolve this problems for you,” Saakashvili said, and spoke at length about how elections will decide who will be at the top of government.

But at the end he repeatedly said that his aim is for Georgia to move forward and that he will be a participant in this process himself.