Saakashvili: Georgia’s election is a matter of national security

Saakashvili: Georgia’s election is a matter of national security 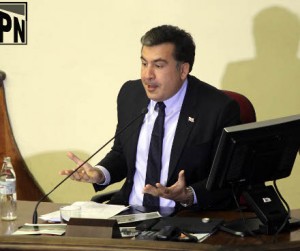 'The enemy is awake' and will try to disturb the election, says Georgia's president Mikheil Saakashvili. (Photo: Interpressnews.)

TBILISI, DFWatch – The president of the former Soviet republic of Georgia says this fall’s parliamentary election will be an important exam and says “conducting the freest elections which have ever been conducted is a question of national security.”

Mikheil Saakashvili warned that ‘the enemy is awake’ and will try to disturb the election.

The statement came while the president was addressing parliament February 28 about the state of his country.

“I consider that this is a very important exam for us an and a matter of principle to us that it will be the most free, most transparent and the most democratic elections ever conducted in Georgia,’ Saakashvili said.

‘We invite all international monitors for this, for preliminary monitoring, to monitor election day, because this is in our interest, this is an issue of national security along with all the other things.”

“Or enemy is awake and of course, will do its best to distort this process. So as many objective and independent monitors will be there, finally the truth will find the way…”

Addressing the controversy over new party financing rules, which have led to street protests by influential organizations like Transparency International, Saakashvili said the flexible, wide powers are necessary.

“We should provide transparency of political financing, so that each voter understands what money is in the political campaign, what are the interests, who and what are going to receive instead of this money?”

“During the future election campaign, different political players will present various views and concepts. We should agree on the fair rules of the game. We should conduct this election campaign, not to harm our investment environment, not harm our economy, not destroy or decrease income for Georgian families. Because last year, this happened several times, and I think that despite having more immunity and it’s harder to concuss and do all these, we all should be exceptionally careful.”

The president said that the political system in the country is absolutely open for any political force which acts within legal boundaries.

“The latest months showed to all of us that our political system is fully open for great and new political players. New political movements are established and new political coalitions are created. I only salute this; this is completely new organic part of the democratic process,” he added.