Saakashvili: Minister must be held to account for prisoner death

Saakashvili: Minister must be held to account for prisoner death 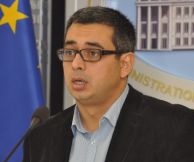 TBILISI, DFWatch–A 16-year old prisoner has died in Prison No 2 in Kutaisi, Georgia’s second largest city. Preliminary information indicates that it was a suicide, but the teenager’s family calls it a murder.

According to the Prison Ministry, the deceased was brought to jail 24 hours ago, detained for theft. Prison Minster Sozar Subari said it was his second sentence. August 28, he was pardoned by the president.

“It is unclear what happened, because he knew that he would be released in a few days. He was sentenced to pay the bail,” Subari said, adding that during the day several people visited him. “The head of the social agency also visited him. After half an hour, when he returned to his cell, he was dead.”

Tengiz Dzvelaia, the father of the deceased, claims that his son didn’t have any reason to commit suicide, as he was getting out on bail soon. He claims that his son was killed because of a tense relationship with one of the so-called jail-watchers, which are prisoners who have certain privileges.

The father claims that his son didn’t want to be placed in Prison No 2 in Kutaisi.

“It seems that he was tortured. In order to hide the crime they hanged him and said that he hanged himself,” Dzvelaia said.

Subari said it is unknown what happened, because the prisoner requested to be moved to a separate cell, saying that he had problems with ‘certain category of prisoners.’

“It is impossible to talk about watchers or conflict with someone because he was placed in a separate cell after he was brought there,” the minister said, adding that further details will become clear as the case is being investigated.

President Saakashvili demands that the prison minister is held to account. Andro Barnovi, head of the president’s administration, said at a press conference today that it is a tragedy that a 16-year old boy died in prison in uncertain conditions. He said Subari claims it was a suicide, but that this is what he has been told, and he wasn’t there.

“These facts haven’t been checked and we don’t have any reason to trust this version,” he added.

Barnovi thinks it is also suspicious that an autopsy was conducted without informing the parents of the deceased, and said no-one trusts the result of the autopsy.

According to Barnovi, the family of the boy demands that the minister comes to Kutaisi.