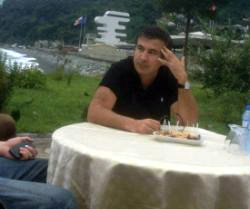 TBILISI, DFWatch–Former President Mikheil Saakashvili on Saturday appeared at Sarpi checkpoint’s Turkish side, on the border between Georgia and Turkey and met with members and supporters of his National Movement party.

After his appearance was reported, the Prosecutor’s Office started procedures to declare Saakashvili internationally wanted.

The National Movement claims this was done in reaction to his recent visit to Sarpi, where Saakashvili criticized the government’s actions. The UNM claims it is political retribution.

There have been problems in recent days at the customs checkpoint at Sarpi. People have been standing in rows for hours in the heat. Georgia explains that this is due to the summer season and large number of people crossing the border.

During his surprise appearance at Sarpi, just 1.5 miles away of Batumi, Georgia’s tourism hub on the Black Sea shore, Saakashvili said the problems at the checkpoint in Sarpi are an example that things are getting ‘back to the past, to Shevardnadze’s time.’

He also said that this customs checkpoint expresses the current situation Georgia is in today, and he criticized the government for this.

A criminal investigation has been launched against Saakashvili in several cases. These are: the dispersal of an anti-government rally on November 7, 2007, and the breaking into the offices of Imedi TV.

Another case is related to the beating of former parliamentarian Valeri Gelashvili in 2005. The Prosecutor’s Office claims Gelashvili’s beating was ordered by Saakashvili because he spoke about the private life of Saakashvili in an interview.

Saakashvili is also charged with embezzlement of state money.

The ex-president left Georgia after the presidential election in October, 2013 and has never returned since then. The court sentenced him to preliminary detention and there was declared a domestic search for him.

On Saturday, right after his visit to Sarpi, the Prosecutor’s Office started procedures to declare him internationally wanted.

UNM member Sergo Ratiani told DF Watch that declaring a search at 20:00 in the evening is not serious.

“I think Mr Ivanishvili and Mr Gharibashvili are nervous and their nerves are in an inadequate condition,” he said.

“Today at 20:00 they remembered to declare an international search. No-one will perceive this seriously in a normal state.”

Ratiani further said that Saakashvili may be refused entry to Vanuatu or other states which have recognized the breakaway territories Abkhazia and South Ossetia.

“But I doubt that Saakashvili aspires to go there,” he said.

Also Member of Parliament Davit Darchiashivli from UNM said he thinks the Prosecutor’s Office decision was a response to Saakashvili’s recent visit to Sarpi.