Saakashvili in unusual conflict with own security service

Saakashvili in unusual conflict with own security service 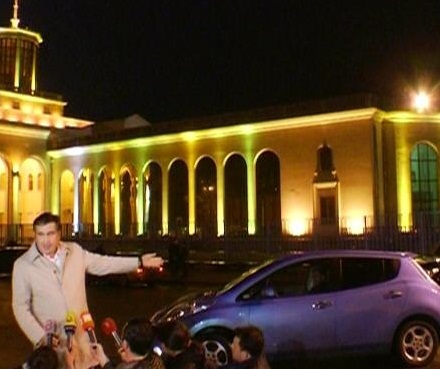 TBILISI, DFWatch–President Mikheil Saakashvili has started a boycott of the protection services, testing the limits of the law.

The message he wants to get out is that the government has cut his funding so much that they just as well might take away the security protection as well.Thus, Georgians have seen him drive to and from the airport in a tiny electric car sitting next to his wife.

But the security service isn’t willing to take part in the boycott of sorts. After Saakashvili and his spokesperson first said the he refuses to have guards and escort around him, the government responded that it is not subject for president to decide whether he will be protected or not. The Special State Protection Service (SSPS) even said it would start an examination of the president’s latest actions.

On Thursday, the SSPS declared in a statement that the it has strict obligations and doesn’t get involved in political discussions.

“We once again confirm our readiness to implement obligations defined by the law and provide protection for the president,” the statement reads. The SSPS underlines that Georgian law says that the president must be protected.

It was a surprise for everyone when Mikheil Saakashvili appeared in his blue electric car with his wife instead of large luxurious black jeep with a long escort on Wednesday. He was leaving for a visit to Azerbaijan, while everyone was talking about his recent actions to refuse using guard services. https://dfwatch.net/did-saakashvili-drive-without-escort-56797

As promised, the protection service organized protection for him at the airport when he came back from Azerbaijan, but the president called it ‘a circus staged by the government.’

He told journalists that he had never seen so many protection cars in Georgia; not even in foreign countries. He advised the government and the SSPS to take the money for petrol for those cars and instead spend it on the welfare of the citizens.

“Why are these 30 cars here? Why must they follow me? To what political goal do all these serve for?” he asked adding that as a citizen he has right that no one followed him.

“I will go in my economic electric car, which needs little expenses and is on the balance of the administration,” he said as he walked over to his car.

While driving to his residence, an escort still controlled the perimeter around president’s car. According to Georgian law, if the president rejects special protection, SSPS is automatically obliged to provide security for the president.

Earlier on Thursday, the president’s administration issued a statement saying that he refuses to use the services of the guard due to ‘cheap manipulations ordered by Prime Minister.’

“The president plans to use his own [means of] transport and they can take away the armored cars from the garage of the president’s administration.’