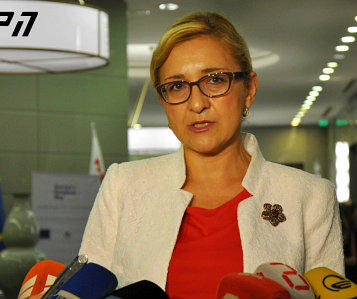 TBILISI, DFWatch–Saakashvili accuses the government of worsening relations with the EU and claims that the signing of an association agreement with the EU has been removed from the schedule of the Vilnius summit.

Tamar Beruchashvili, Deputy Foreign Affairs Minister, who used to be deputy minister of Euro and Euro Atlantic Integration in Saakashvili’s government and is responsible for coordinating issues to do with European integration, claims that there never have been talks about signing an association agreement, but it was planned to do the initial signing.

Friday, President Mikheil Saakashvili said after meeting with Moldova’s president that Georgia now is fighting for initiating the association agreement, but this has now been removed from the schedule of the summit in November.

“Two years ago everybody thought we would sign an association agreement with Moldova but to also adopt declaration on European perspective of the two states that in the future it would have been possible to become candidates for EU membership,” he said, adding that due to Georgia’s domestic factors, signing the document was removed from the schedule.

“In Moldova’s case, it is decided. Georgia unfortunately now has question marks here,” he said.

Beruchasvili explained that this is an issue of signing an historic agreement with the EU.

“That’s why we must follow this procedure, fulfill obligations and work along with EU at the Vilnius summit to timely manage to sign the association agreement. This is the goal,” she said, asking people not to mislead society.

State Minister for Euro Atlantic Integration Alexi Petriashvili noted that the president is ‘far from reality’ and as an example he drew attention to a meeting of EU commissioner Stefan Fule and Prime Minister Bidzina Ivanishvili on Friday, pointing out that the statements they made are the exact opposite of what the president said. https://dfwatch.net/fule-hopeful-about-georgia-getting-association-agreement-81577

“We are not going to adopt yet another set of a nice encouraging words; this is going to be a summit where we hopefully will sign this kind of association agreement,” the commissioner said at a press conference with the PM on Friday.