Saakashvili claims the U.S. is to strengthen Georgia’s military

Saakashvili claims the U.S. is to strengthen Georgia’s military 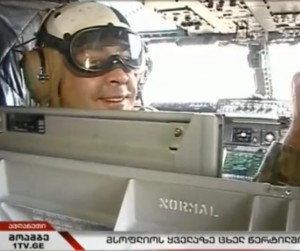 The Georgian President Monday made a surprise visit to his country's contingent in Afghanistan. Later this year, Georgia will send an additional batallion, which will make it the largest non-NATO contributor to ISAF with around 1 700 troops.

TBILISI, DFWatch – Georgian president Mikheil Saakashvili said during a visit to Afghanistan that the United States will help Georgia to defend its territory.

The president was addressing Georgian soldiers in the ISAF mission at a military base in Helmand province.

“The USA will help not only to conduct operations and anti-terrorist activities as it used to be before, but will help to strengthen own defense,” Saakashvili said in the speech, which was broadcast live on the national TV channels in his country.

He also said that Russians for years were preventing Georgians from strengthening the military potential.

“So now, restoring this tradition is the most historical issue,” Saakashvili said, adding that Georgian soldiers in Afghanistan are an international security guarantee.

“This is a guarantee for our future existence. We receive invaluable experience here, in risk of our lives.”

On February 20, Mikheil Saakashvili together with the Defense Minister Bacho Akhalaia and Vice Prime Minister Giorgi Baramidze unexpectedly arrived in Afghanistan, where he met with the soldiers and awarded five medals.