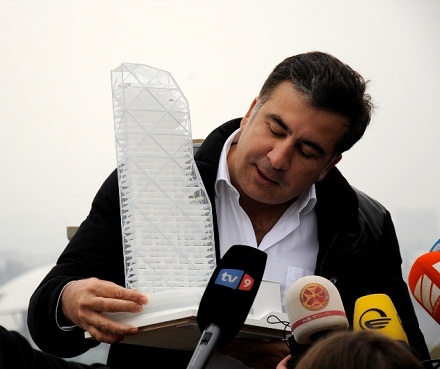 TBILISI, DFWatch — President Mikheil Saakashvili accuses the new government of suspending a number of projects which his government started, and causing a loss of thousands of jobs.

A few days ago, he said that the previous government started many projects and one of them is a hotel with more than 40 floors which was to be built in the center of Tbilisi. The project would have employed 20 000 people, he claimed.

“Yesterday, I was told in the United Arab Emirates that the new government of Georgia stopped it and left 20 000 fellow citizens jobless for completely absurd and made-up reasons,” the president said on January 7.

He was talking about the constructions of a new Kempinski Hotel in a historic building owned by Arabian Dhabi Group in the center of the capital. Years ago, the building was emptied, but no construction work has started yet, and the old building is abandoned and in decay.

Giorgi Seturidze, chair of the Coordinating Center for International Investments (CCII), says that the construction of this hotel was suspended in 2010 because of a corrupt deal between the Georgian government and one of the managers of Dhabi Group. CCII brought Dhabi Group to Georgia and has been managing the company’s activity for a long time, he explained.

“We state with full responsibility that the president’s information that the investor stopped implementing the program due to the new government’s policy is not correct,” Seturidze says. “Financing and implementation of the hotel stopped in spring, 2010 through a corrupted deal between Sami Edwards, one of the Sami Edwards of Dhabi Group, and the Georgian government.”

He explains that the project would have led to a five-star hotel being built on Rustaveli Ave, and USD 150 million should have been spent on constructing it. The company Capital Vostok had a 20 percent share in the project, while the remaining 80 percent belonged to Dhabi Group.

It was expected to be finished with the construction phase in 2011, but has not even started yet.

The president also noted that the new government has stopped the construction of hydroelectric power stations on the River Khobistskhali in western Georgia.

Energy Minister Kakhi Kaladze responded to the criticism by saying that he would advise the president to stop his demagogy, as the construction of hydro power stations on the Khobistskhali will start from March, 2013 in accordance with the project plan.

Irakli Kovzanadze, chair of the Partnership Foundation, says that if any project has stopped in Georgia it means that those projects haven’t been sufficiently studied and analyzed.

“I don’t know which projects the president was speaking about, which project is suspended, because I am not a member of the government. If anything is stopped it means that those projects need more analysis.”