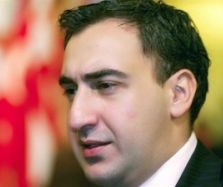 TBILISI, DFWatch–Georgia’s former President Mikheil Saakashvili says the new government has blocked the appointment of one of his former associates as business ombudsman in Ukraine.

However, statements made by Nika Gilauri in early November contradict what Saakashvili said.

Gilauri, who served as prime minister under Saakashvili, wrote on his Facebook page that the position of Ukraine’s business ombudsman was incompatible with his other assignments.

He wrote that he received an offer from EBRD, which is in charge of the recently created business ombudsman institute in Ukraine, and is a member of its management board. Gilauri went to Kiev and got full support from the board, but he had to reject the proposal because he learned that his current job contracts didn’t comply with this new position.

Saakashvili claimed that the government of Georgia sent a note to EBRD that if they appointed Gilauri to this post Georgia would halt its cooperation with EBRD. The Foreign Ministry’s press office has not confirmed that it sent such a note.

It is not the first time a former government official is offered a high ranking position in the new Ukrainian government. Former Economy Minister Kakha Bendukidze, who recently died of heart failure, received an offer in late May, 2014. He was invited to join the advisory board of the national council on reforms together with representatives from Latvia, Poland and Slovakia. They were tasked with planning a strategy for Ukraine’s development toward the year 2020 within three months, under the auspices of the Economic Development and Trade Advisory Board.

Saakashvili said in an interview that Ukraine also planned to appoint Bendukidze as economy minister or vice prime minister.

Another former politician, Giorgi Vashadze, who served as deputy justice minister under Saakashvili and is credited with planning the so-called houses of justice, is cooperating with the Ukrainian government.

Vashadze told DF Watch that his organization Foundation of Innovations and Development works with reforms in several spheres in Ukraine.

“It includes houses of justice, anti-corruption reforms, registration of refugees, simplifying usage of administrative services, purchasing, development of law enforcement bodies and other things. Our cooperation started in 2014 and it is continuing,” he told us.