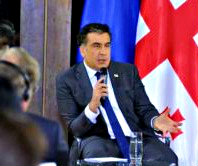 TBILISI, DFWatch–Georgian president Mikheil Saakashvili has changed the date of the upcoming presidential election from October 31 to October 27.

He announced date of the election July 2, but the date caused concern among experts and non-governmental organizations, who said that a presidential election cannot be held on a Thursday, but should rather be held on a day of rest, according to Georgian legislation.

Others said it will also be hard for foreign citizens to vote on a working day.

On Wednesday, the president’s spokesman Andro Barnovi announced that the date of the election had been changed to October 27, which is a Sunday. He made this statement after a meeting with representatives of NGOs.

Barnovi said he spoke with the president after meeting with the NGOs and noted that the date of the election wasn’t a matter of principle for the president, but the NGOs made a strong argument and he decided to listen to their advice and change the date.

12 organizations participated in the meeting. Along with legislative problems they outlined that emigrants wouldn’t have been able to vote.