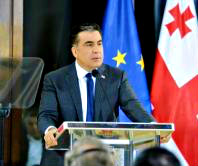 Prime Minister Ivanishvili and several ministers who are abroad will not attend the meeting, but some government officials are expected.

The session will be held at the President’s palace and be chaired by Saakashvili. The other members are the prime minister, the foreign affairs minister, the defense, interior and finance ministers, and the secretary of the Security Council.

Georgia has been governed by a new parliamentary coalition since October 2012 while the president and his National Movement are in minority, a power-sharing arrangement which at times has been fragile; and it is uncertain who will attend the meeting today.

Prime Minister Bidzina Ivanishvili said he has other commitments and is unable to attend, while Defense Minister Irakli Alasania and Foreign Affair Minister Maia Panjikidze are both abroad at the moment. Panjikidze asked to postpone the meeting till Monday when they both will be in Georgia. She said it is important for them to attend the meeting.

But the session will not be postponed.

Finance Minister Nodar Khaduri signaled that he was planning to attend the meeting. Also Speaker of Parliament Davit Usupashvili said he will attend.