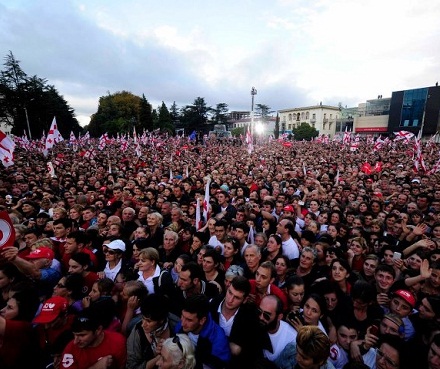 TBILISI, DFWatch – Georgian president Mikheil Saakashvili dedicated a long speech to recent events in the prison system in a speech while meeting with locals in the port city Batumi.

He said it was a shock for him, meaning the footage aired on TV, which shows beating and rape of prisoners in a Georgian jail.

“I have been justice minister and in those times thieves managed the prison, I admit,” he said, “thief was beating, thief was raping, thief did everything to other prisoners.”

He then reminisced that they have fixed the food problem, established long-term dates and started to expand the prison system, and drug addiction was overcome.

“All these things ended. So let’s do not say that nothing has been done on this emotional background. Much was done, but we couldn’t finish the job.”

He said such thing happens in many countries. Prisons are a disaster and in the U.S. worse things have happened in recent years.

“It happens in Europe and they arrest those people as we did, but two ministers have never resigned. Why did we do this? Because we are very sensitive. The country was in the hands of Rambos. What happened in Gldani Facility, it was happening in each yard and district of Georgia. Then I ask you – who will take this case to the end: Giorgi Tughushi (current prison minister, former public defender), Eka Zghuladze, (interior minister) or Rambo Goga Khaindrava and Tamaz Tamazashvili, who personally ordered the obtaining and publishing of this material?”

Tamaz Tamazashvili is a political prisoner who serves time in the same prison as the torture videos were filmed in; Gldani prison, officially known as Prison Number 8. The Georgian government tries to blame everything about the scandalous footage on him.

The Georgian president said that the video material should have been published September 24 and the plan was to disturb the ruling party five days before the election.

He said it is playing with Russian rules to manipulate with video footage and remarked that months ago money was proposed to take video cameras, go on provocation, make footage, put people in shock and win the election.

The same day, on Sunday, the ruling party held a rally in Zugdidi, a town in western Georgia, where on Saturday the government’s main competitor Georgian Dream also held a rally. The main square was full of people during both rallies.

In Zugdidi, the president remarked that the recent events was a conspiracy prepared a long time ago.

“For months they knew that those poor people were bitter and tortured, but weren’t saying it until we arrested people. If they had revealed it earlier, it would have ended immediately.”