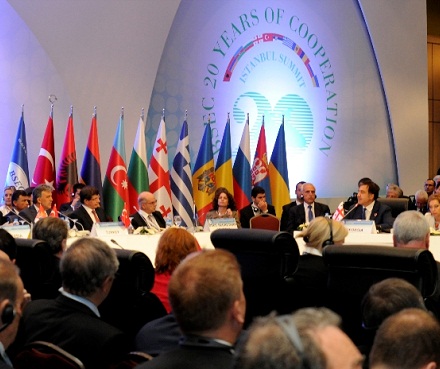 President Mikheil Saakashvili took the opportunity at the summit of the Organizations for Black Sea Economic Cooperation to warn that the Russians will soon bring out their forces. In September, Russia is to have a military exercise in the Caucasus region, also inside Georgia's breakaway regions. (Photo from the president's office.)

The comment came during a summit of the Black Sea Economic Cooperation which took place yesterday in Istanbul, Turkey. The Georgian leader in his speech touched upon relations with neighboring countries, including Georgia’s attitudes to Russia, as well as the region’s economic development.

It is important to define common interests and plans for how to increase investments and economic development in countries of the region, he said.

“We have perfect relations with each country, except one clear exception. But in regards to Russia too, I remind you that we supported Russia’s membership in World Trade Organization. We established visa free rules for Russian citizens.”

He said this was a message to Russian citizens that Georgia is not the enemy. The president also pointed out that Georgia exports electricity to Russia. He said relations will get in order very soon — when Russia removes its troops from Georgia.

“I think this will happen much sooner than anyone can imagine,” he said, as quoted on the webpage of the president’s office.

All twelve members of BSEC agreed to make the organization engage more and support more projects in the region.

Black Sea Economic Cooperation was established in June 1992 with Georgia among the founding nations, along with Russia. Its purpose is to maintain peace, stability and development in the region, as well as supporting friendly and neighborly relations.