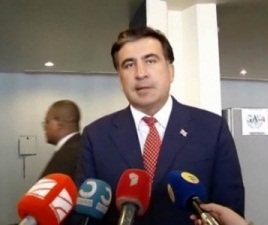 TBILISI, DFWatch — Georgian president Mikheil Saakashvil has appointed a former government official who has twice been detained after the change of government as new governor in the Samegrelo region.

Tengiz Gunava used to be Chairman of the General Inspection at Interior Ministry. After the parliamentary election, police have detained him two times. The first time, he was charged with illegal possession of weapon and drug use, and the second time with appropriation of 3 000 liters of petrol.

In both cases, he was released on bail. The five policemen who participated in his first detention were discharged.

Saakashvili today held a meeting with members of local government and trustees in Samegrelo to present Tengiz Gunava as new governor. He said Gunava has successfully fought criminals in the region.

The president said there is a need for trustees who will fight against criminals and against ‘the return of the corrupt past in Georgia, which takes place under the governance of the new government.’

“We want Georgia to continue building; governors cooperating with local and central bodies. Their function is not confrontation, but to protect Georgia’s achievements and provide a continuation of the development,” the president said, adding that they want the government to do its own business and stop accusations that he and his party are interrupting them.

“We are not organizing any kind of political crisis,” he said, referring to an ongoing discussion that he might dismiss the current government now or dissolve parliament in April, when he will have the right to do so, in order to create a political crisis.

“We want the government to do its job, to develop the economy, help people, continue its projects and take care of Georgia’s future.”

In his speech, Saakashvili said there have already been several instances of police accepting bribes in Georgia. He said criminals engaged in corruption in the past have returned, including people engaged in cigarette and scrap contraband.

“For example a person, who was an employee during the Shevardnadze time with the nickname Kulaba [piggy bank in Georgian] was appointed as chairman of the police in one of the Samegrelo regions,” he said, adding that people who were paying money to be appointed to official posts during Shevardnadze’s time have returned.

He reiterated that important construction projects have been halted, also in Samegrelo.

The Interior Ministry replied to his statement the same day, saying that there has not been observed any cases of police accepting bribes. The Ministry called on people, government officials and parliamentarians to immediately inform the ministry if they witness anything of the sort.

The ministry says it can not confirm that a person with the nickname Kulaba has been appointed to a post in the regional police in Samegrelo.

The ministry called on everyone including the president to avoid making statements that harm the reputation of ministry employees without having evidence, as it discredits the whole ministry.

Kakha Kozhoridze, chair of Georgian Young Lawyer’s Association, says it was illegal to appoint Tengiz Gunava as governor, because according to Georgian law a person cannot be appointed to an official post if he is under investigation or in detention.

“We have checked, and it turns out that there is an investigation against Gunava. Accordingly, appointing him to this post is in direct violation of the law. What is the point of presenting him, if the president doesn’t plan to appoint him to this position, since his appointment is illegal?”