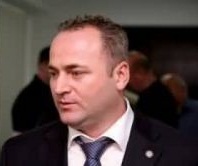 TBILISI, DFWatch–The National Movement (UNM) has lost one more member of Tbilisi City Council, but still has a majority of seats.

Nikoloz Khachirashvili on Tuesday said he is leaving the UNM faction, but will remain an independent and not join any other faction.

He also said the reason he is leaving is that he has no common views with the National Movement.

Khachirashvili added that there was no pressure from Georgian Dream coalition members.

The party has lost elected members both in the parliament and the city council after losing the election last October.