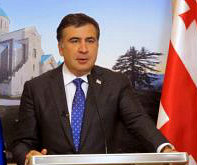 TBILISI, DFWatch–President Mikheil Saakashvili has vetoed the amendment of three more laws in a package passed by parliament. This time it was about the law on broadcasting, the election code and the law about the public defender.

The president’s spokesperson Manana Manjgaladze said on Tuesday that Saakashvili has sent the bill about the broadcaster back to parliament with ‘motivated remarks’, which envisages the independence of the Georgian Public Broadcaster and also keeps a guarantee not to interrupt its activities.

Manjgaladze explained that the draft makes it possible to declare distrust in the supervisory board of GPB and also suspend the authority of the board. Current legislation does not allow for this. The bill reduces the quorum, the number of votes in parliament required to declare distrust in the members of the supervisory board.

“This clearly puts the independence and impartiality of the board in danger,” she noted.

Parliament will review remarks of the president and will vote for it, but if his proposal will fail, then parliament will again vote for the first version of the bill and if the majority supports it then the speaker of parliament will sign it into law.

For nine years, Mikheil Saakashvili never used his right to block laws passed by parliament, but after losing the parliamentary election in October 2012 and seeing the Georgian Dream coalition coming into government, he has blocked many bills.