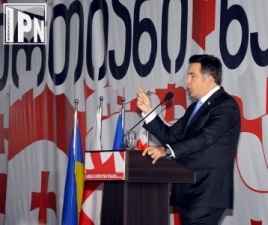 TBILISI, DFWatch — The National Movement party of President Mikheil Saakashvili will return to parliament on Monday.

This became clear at a party conference Sunday. The president addressed his party’s activists and tried to fire them up as they are out of government, trailing in the polls and see many of their top people on trial for things they did while in office.

The party’s members of the national assembly laid down work last Thursday in protest against the detention of former government members who are charged in a large corruption ring scandal involving Russian energy giant Inter RAO.

All six were released on bail Friday. Prosecutors say they conspired to evade taxes for three power stations, and were paid a million dollar bribe which was transferred through a dummy company.

Among the accused former officials are Nika Gvaramia, Director of the TV company Rustavi 2, and Alexandre Khetaguri, former Energy Minister. They all deny guilt, with Gvaramia calling it ‘political persecution’, while Khetaguri called it a ‘planned enactment’.

The former Speaker of Parliament Davit Bakradze told journalists after the party conference that when they left parliament in Kutaisi in protest, it wasn’t a boycott, but a decision which applied to a specific situation.

The National Movement wants to work in a constructive environment, he said, adding that the opposition plans to get back to work from this week and also attend unscheduled sessions.

This was the second time the party stopped work in parliament in Kutaisi, which lies in western Georgia.

The first time was in November, when they protested against the detention of former Interior Minister Bacho Akahalaia and former Head of the Joint Staff Giorgi Kalandadze. That protest lasted one week.