Saakahsvili to deal with problems in the election environment

Saakahsvili to deal with problems in the election environment 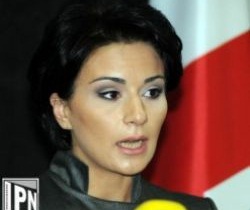 President Saakashvili's spokesperson Manana Manjgaladze says the president has a plan to deal with the problems identified by OSCE observers. The observers said the courts and the audit bureau lack independence. (IPN.)

TBILISI, DFWatch – A spokesperson for President Mikheil Saakahsvili says the president is thankful to a delegation from OSCE’s Parliamentary Assembly which recently criticized conditions here before the election.

The experts visited Georgia in order to the study the election environment and gave a critical assessment at the end of their visit. The spokesperson said the president already has prepared action plan to foresee their remarks.

After a three day visit from August 20, the delegation from OSCE’s Parliamentary Assembly on Thursday described what problems they had seen during their stay.

The most important things they noted, was the lack of objectivity by law enforcement bodies, mainly the State Audit Service, but also the courts, which are acting on unclear and biased instructions;. The election experts also noted that society is polarized and that there are signs of Leninism in the election campaign.

The government answered that it saw the criticism as based on incorrect information provided by opposition party lobbyists.

Thursday evening, Manana Manjgaladze, the president’s spokesperson, said there had been a meeting between President Saakshvili and members of the delegation.

“I want to remind [people] that back in summer, the president took the initiative to invite international organizations, including OSCE long-term observation missions. Within the frames of the OSCE delegation’s visit, a meeting was held with the president, which was conducted in complete mutual understanding.”

Manjgaladze noted that during the meeting, both achievements and problems were discussed, as well as ways of dealing with these problems.

“I want to remark that the president greatly respects Mr Ricardo Migliori, Mr Tonino Picula and other members of the delegation and is paying attention to each of their views. I also want to underline that cooperation with OSCE and its observation mission on conducting free elections in Georgia is very important.”