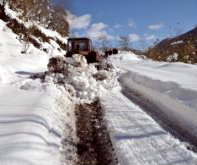 TBILISI, DFWatch–Trailers, semi-trailers and vehicles with more than 30 seats are now allowed to drive between Gudauri and Kobi on the S-7 road near Russian border.

But due to snow and ice, large vehicles must be equipped with snow chains.

According to the Roads Department, it is not allowed to make stops between Gudauri and Kobi, and drivers must use anti-avalanche tunnels.

Restrictions remain in place on the SH-7 road in Svaneti due to snow and ice. Between Lakhamura and Ushguli, vehicles without four-wheel drive must use snow chains. Between Zugdidi and Lakhamura, traffic is unrestricted.

The road section between Nardevani and Rodionovka in the south of Georgia is still closed.