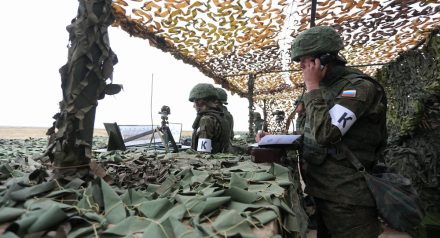 Russian troops near the village of Dzartsemi, South Ossetia. (Sputnik-Ossetia.)

Troops from all of Russia’s four military districts are taking part in the drills. Well over 2,000 Russian soldiers and more than 1,000 combat vehicles are involved.

Much of the exercise is focused around the village Dzartsemi in South Ossetia, where up to 1,500 troops are practicing military operations in mountainous terrain, Russian media reports.

Separately, 100 snipers are present in the same location, training for sniper warfare.

A part of the exercise involving up to 300 soldiers is taking place in the village Tsebelda in Abkhazia, which is located in the strategically important Kodori Gorge, which was seized by Russian troops during the brief Russo-Georgian war in August, 2008.

There is also exercise activity near the two Abkhazian coastal towns of Gudauta and Ochamchire.