Russian given 12 years for Batumi shooting

Russian given 12 years for Batumi shooting 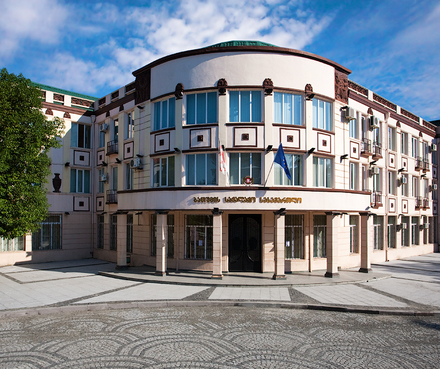 TBILISI, DFWatch–Batumi City Court on Wednesday sentenced a man to 12 years in jail, who is suspected of murdering a Russian diplomat and his wife in Abkhazia last year.

Yusuf Lakayev, an ethnic Chechen, was charged with illegally crossing the border, illegally purchasing, keeping and carrying weapon and attempted murder, in a shooting incident in Batumi on September 13, 2013.

Three days earlier, Dmitry Vishernev, first secretary of the embassy of Russia to de facto Abkhazia, was murdered as he and his wife were driving in his car in Sukhumi, Abkhazia. The diplomat was killed on the spot while his spouse died in hospital.

The attacker first tried to use an explosive device, which failed, and then shot Vishernev and his wife with a nine caliber gun.

Abkhaz prosecutors, who handled the investigation with substantial support of Russian investigators, suspected Yusuf Lakayev of having carried out the murder, and declared him wanted.

On September 13, he became involved in a shooting incident in Batumi, where one policeman and one civilian were wounded, as well as Lakayev himself. According to the Interior Ministry, he illegally entered Georgia and was planning to leave for Turkey. Investigators said two Georgians were helping him, and they were also detained.

Later Lakayev, who was born in 1988 in Chechnya, appeared on a list Russia published of extremists considered a security threat ahead of the Sochi Olympics.

Wednesday, Batumi City Court sentenced him to 12 years in jail for deliberate murder attempt. He was also convicted of illegally purchasing, keeping and carrying a weapon, as well as illegally crossing the border, but the 12 year sentence absorbed the lesser sentences, in accordance with new principles for sentencing after Georgia ended the practice of mandatory consecutive sentence.

Piruz Tsulukidze, who was detained with him, was sentenced to two years in jail, and Temur Bakhuntaradze to two years and three months in jail.

Defense lawyers plan to appeal the sentence to the Appeals Court.

Lakaev was not charged for alleged Sokhumi double murder as Georgia doesn’t recognize investigation carried out by separatist authorities.