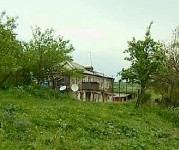 TBILISI, DFWatch–A 42 year old man was detained by Russian border guards at the funeral of his mother-in-law, which was held on a cemetery close to the border with South Ossetia.

Since the cemetery is close to the border, Solashvilis’ family found it difficult to proceed with the funeral.

The de facto border cuts through populated areas and pasture land villagers sometimes find it hard to see exactly where it is.

The television channel Rustavi 2 quoted a trustee from the village who said that this was the fifth time in one month that someone has been taken from this area.

The foreign minister and defense minister on Sunday responded by declaring that such detentions are ‘unacceptable.’

“This is an issue which Georgian diplomacy raises at every international format of talks,” she said.

Defense Minister Tina Khidasheli said she wasn’t familiar with Sunday’s incident but that this is not the first time and ‘unfortunately not the last one.’

“I have great hope that within the strategic patience policy, which Georgia has chosen, there won’t be any particular tensions and finally we will solve problems like kidnapping, crawling annexation, moving borders peacefully, through negotiations with our partners,” she said, adding that each such incident is reason for concern but looking at the statistics, the number of cases has been ‘significantly reduced.’

An organization recently published data which showed that the number of kidnappings grew dramatically until 2013, then leveled out at around five hundred per year. 139 people have been detained in the first three months of 2015.