Russian bases in Abkhazia have mushroomed since 2008 war

Russian bases in Abkhazia have mushroomed since 2008 war 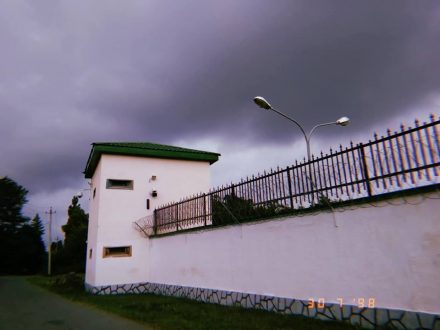 The Russian military base in Tagolon, a village in the ethnic Georgian Gali region of Abkhazia. (DFWatch.)

TBILISI, DFWatch–Since the 2008 war, Russia has expanded its military infrastructure in the breakaway republic Abkhazia dramatically.

In the military facilities located in settlements with predominantly Georgian population, Russian military personnel and their family members barely go out of the gates and live in actual isolation from locals.

“They live in isolation from the world of the ‘little people’. It looks like two parallel worlds. It made me very, very angry,” says a 19 years old resident of Gali, an ethnic Georgian who peeked into the Russian military facility in a village which she is reluctant to identify.

“The military bases are surrounded by big fence, with several residential buildings and full infrastructure inside so that people live without contact with the outside world. There are kids’ entertainment lots inside, in short, [these sites] have everything in place. But they avoid to go outside the gates, probably out of fear. Yet sometimes you can find [family members of Russian military personnel] go for shopping to nearby stores,” she said to DFWatch.

However, it is different in Sokhumi, where the headquarters of the Russian military contingent on Abkhazia is located. This facility is familiar to many ethnic Georgians from Gali, as it lies adjacent to the office which issues ‘visas’ and residence permits.

The military personnel and family members of Russian facilities in Sokhumi have drastically different lifestyle as they eagerly walk out of and mingle with locals, another Gali resident who recently visited Sokhumi told DFWatch.