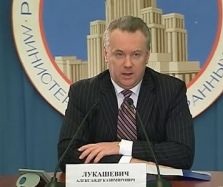 TBILISI, DFWatch – Moscow suggests that Tbilisi solves its own problems with democracy and human rights, before giving advise to Russia about saving democracy.

This is a statement of Alexander Lukashevich, spokesperson for the Russian Federation’s Foreign Ministry in response to a statement published on Monday by the Georgian Foreign Affairs Ministry.

The State Duma on July 13 passed a law which means that NGOs funded from abroad and engaged in political activity will be treated as foreign agents, Russian media reports.

Georgia’s Foreign Ministry says the new law reflects fully the Russian ruling elite’s critical attitude towards foreign and international organizations, whose work seeks to contribute to the development of civil society and to the protection of human rights.

“In their minds, the word ‘agent’ is intrinsically associated with ‘foreign spy’ i.e. the Enemy, and their choice of the sentence ‘not-for-profit organization carrying out the function of a foreign agent’ was made to breed mistrust and criticism of these non-governmental organizations among the wider population,” the statement says, adding that the new amendments is a continuation of the campaign waged by the Putin regime against civil society in Russia to bring it into complete submission and conceal the massive and flagrant violations of human rights from the international community.

Lukashevich today responded that the best Georgian authorities can do to promote democracy in the world is ‘to finally solve serious problems in compliance with democratic freedoms, human rights and national minorities in their own country.’

These problems have repeatedly pointed out, and the UN Council on Human Rights, Council of Europe, and other human rights organizations, Lukashevich says.

“Claims of the regime of Mikhail Saakashvili, on the role of mentor in matters of international human rights are simply ridiculous,” he added.