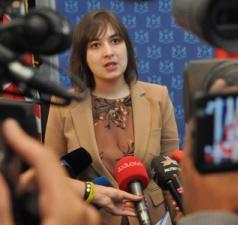 TBILISI, DFWatch–A lawmaker from the National Movement party in Georgia has threatened to sue her colleague from the Georgian Dream coalition for defamation during a debate about rough interrogation methods.

The quarrel broke out during a session of the parliamentary committee on human rights on Monday. The government wants to postpone enforcement of a rule that witnesses are only to be questioned in the courtroom, not by prosecutors, police or investigators.

The reason for this proposal is a long history of mistreatment. Leader of the Georgian Lawyer’s Association Zaza Khatiashvili called the traditional style of questioning of witnesses by investigative bodies in Georgia – to bring them in to the police or prosecutor office where they might be subject to physical or psychological pressure – a ‘Bolshevist method’. During the years under President Saakashvili’s hard-handed rule, from 2004 to 2012, there were many cases of people being beaten during questioning.

A proposal to not let investigative bodies do any questioning of witnesses has been postponed five times since 2009 by the National Movement. After losing power and seeing some of their former tops under criminal investigation, the National Movement party now wants the rules enforced as soon as possible. Georgian Dream, however, wants to postpone the enforcement for two years.

Member of Parliament for the National Movement, Chiora Taktakishvili, said that there is a difficult situation in Georgia when it comes to human rights. Committee head Eka Beselia from Georgian Dream responded that Taktakishvili was a member of the same committee while her party was in government but didn’t speak out about torture and mistreatment, and thereby widened the issue to not only the treatment of witnesses, but also suspects. During the National Movement’s nine year rule, suspects were often beaten, and sometimes died during questioning, and violence against detainees was also used for political purposes as recently as in 2011, during a violent crack-down on the opposition.

Taktakishvili asked which cases the new government has investigated. Beselia responded that they are being investigated.

“You should have spoken when you committed torture incidents,” she said. “You don’t have moral right to talk about it.”

Beselia said that for three days she has been meeting people tortured by UNM members.

“People that you have tortured are on hunger strike in the prisons today,” she added.

Beselia then asked Taktakishvili to turn off her microphone and told her to be let out from the discussion room for violating procedure.