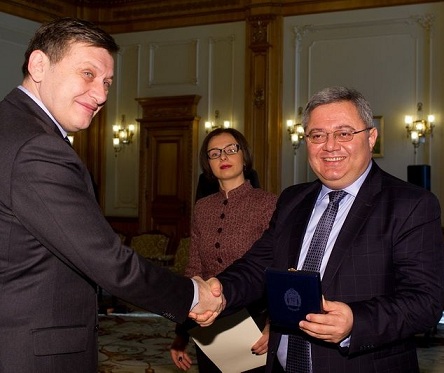 President of the Romanian Senate, Crin Antonescu (left), and Speaker of the Georgian Parliament, David Usupashvili. (Photo published by senat.ro.)

Speaker of Parliament Davit Usupashvili, who is visiting Romania with other Georgian politicians, was attending the senate as an honorary guest during the session at which the resolution was adopted.

He told journalists that Romania’s parliament once again expressed its support for Georgia’s territorial integrity, European integration and decision to join EU and NATO.

“This resolution is somewhat a summing up of positions towards Georgia in Romania,” he said, adding that the goal of their visit is to see a reaffirmed support from Georgia’s partner countries, which is needed in the next months and years.