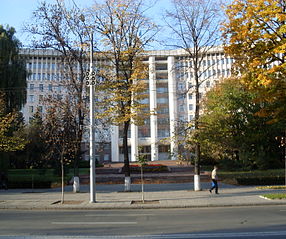 Leaders of the three countries in Europe’s southeast signed the agreements at a ceremony in Brussels on June 27, but the agreements will not come fully into force until all EU’s members states have ratified them, as well as the EU parliament.

The lower house of the Romanian parliament, the Deputies’ Chamber, adopted the draft laws about ratification on July 3, thus completing the ratification procedure.

“The association agreement is an indisputable quality leap as regards the framework that was until now governing the relationship of the Republic of Moldova and the European Union,” the Senate’s statement reads. http://www.agerpres.ro/english/2014/07/03/senate-approves-bill-on-ratifying-eu-republic-of-moldova-association-agreement-14-09-22

Romanian Prime Minister Victor Ponta on Wednesday said that the ratification of the agreements with Moldova, Georgia and Ukraine is to support these countries in the near future. http://www.mediafax.ro/externe/ponta-sa-sprijinim-moldova-georgia-ucraina-vor-exista-represalii-din-partea-vecinilor-de-la-est-12875695

“This is a good will of Georgia’s great friend, Romania, to ratify the document earlier than the Georgian parliament,” Panjikidze’s statement reads.

She added that it is remarkable that both chambers of the Romanian parliament unanimously ratified the treaty, and she expressed gratitude on behalf of the whole Georgian government.

The vote was far from unanimous in the 101 strong Moldovan parliament voted on whether to ratify its association agreement with the EU; only 59 MPs voted in favor. The Communist Party’s delegates marched out of the session room in protest.

By signing the association agreement, Georgia committed itself to what’s called convergence with the EU’s foreign and security policy. One part of the treaty called a deep and comprehensive free trade agreement means that Georgia also must pass hundreds of laws that the EU has made, in areas of trade, consumer protection, and environmental regulation.

The Georgian parliament plans to ratify the agreement in July.