E60 closed near Zestaponi, difficult driving conditions on many roads

E60 closed near Zestaponi, difficult driving conditions on many roads 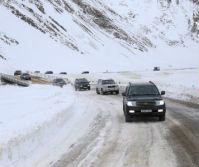 TBILISI, DFWatch–The Road Department of the Infrastructure Ministry informs that trailers and semi-trailers from today are allowed to drive between Igoeti and Khevi on the Tbilisi-Senaki-Leselidze road.

Restrictions have been lifted for all types of vehicles between Akhaltsikhe and Ninotsminda toward the border with Armenia.

Trailers and semi-trailers are allowed to drive between Aragvispiri and Larsi on the Mtskheta-Stepantsminda-Larsi road.

On the same road, trailers, semi-trailers and vehicles with more than 30 seats are only allowed to drive between Mleta and Kobi if they have snow chains. Between Gudauri and Kobi, all vehicles are required to use snow chains.

The E60 east-west highway is again blocked near Zestaponi due to flooding of the river Chkhara. A detour is offered from Zestaponi via Bagdati to Kutaisi, but trailers and semi-trailers are not allowed to drive that way.

On the Kutaisi-Tkibuli-Ambrolauri road, trailers, semi-trailers and vehicles with more than 30 seats are prohibited from driving between Tkibuli and Ambrolauri. For all other vehicles, snow chains are required through the Nakerala pass (from 37km to 50km), but north of the pass until Ambrolauri, passage is free.

On the Zugdidi-Jvari-Mestia-Lasdili road, only vehicles with four-wheel drive are allowed between Jvari and Khaishi. From Khaishi to Lasdili, it is only allowed to drive if the vehicle is fitted with snow chains.

The SH-21 road between Akhalkalaki and the border with Turkey is closed for all types of vehicles between Sulda and Kartsakhi.