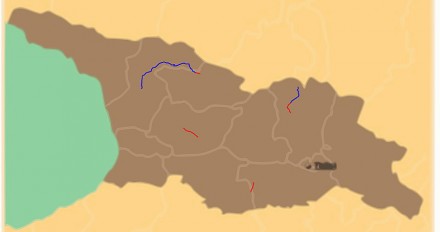 Four road sections are completely closed (red), while there are restrictions in other sections (blue). (Source: Roads Department.)

TBILISI, DFWatch–Several roads in Georgia are now closed or have traffic restrictions due to the weather conditions, according to the Roads Department’s January 8 update.

The S-3 (Mtskheta-Stepantsminda-Larsi) is closed for all vehicles between Mleta and Kobi because of danger of avalanche, wind and heavy snowfall.

Also on the S-3, trailers, semi-trailers and vehicles with more than 30 seats are not allowed to drive between Aragvispiri and Mleta, and between Kobi and Larsi.

A further restriction on the S-3 is that in Dariali Valley, vehicles are not allowed to make stops.

The SH-7 (Zugdidi-Jvari-Mestia-Lasdili) is closed for all traffic between Kala and Ushguli due to strong rain and danger of avalanche. Cars with four-wheel drive are allowed to drive between Jvari and Kala, while other types of vehicles are only allowed if they are fitted with snow chains. Between Zugdidi and Jvari, traffic is without restrictions.

The E-60 (Tbilisi-Senaki-Leselidze) is still closed near Zestaponi at the point it crosses the river Chkhara due to flooding. Light vehicles may take the detour from Zestaponi via Bagdati to Kutaisi.

On the SH-31 (Koda-Partskhisi-Manglisi-Tsalka-Ninotsminda), all types of vehicles are prohibited from driving between Nardevani and Rodionovka because of strong wind and low visibility.