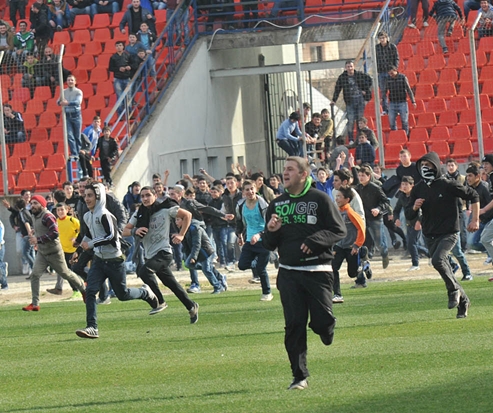 TBILISI, DFWatch–A match of Georgia’s National Football Championship in Kutaisi between old rivals, local FC Torpedo and Dinamo Tbilisi, was interrupted by the riot of Torpedo fans who flooded the field and attacked Dinamo players and their fans.

The score was 2-0 in Dinamo’s favor when a group of Torpedo fans burst onto the field. Some of them attacked Dinamo players while others gathered below the rows of Dinamo fans, throwing stones. The latter reciprocated with breaking seats and throwing the parts.

The referee had to stop the match immediately.

Players of FC Dinamo and their fans were escorted by patrol and riot police from the stadium. Five Dimano players were injured, as well as members of its fan club.

The police had to escort a bus and other vehicles carrying FC Dinamo fans through Kutaisi as the violence continued outside the stadium.

According to media reports, ten people were detained during the incident. The Interior Ministry has launched an investigation.

16 people were detained during the incident, and Kutaisi City Court later fined them from 100 to 500 lari  (USD 60-300) each for petty hooliganism and resisting the police.

The committee also decided that Torpedo and Dinamo must play the next five matches on a neutral stadium.