Respect will not save women from violence

Respect will not save women from violence 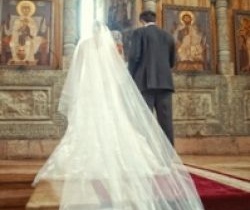 Arguably the most influential person in Georgia, the Patriarch Ilia II, does not agree that a woman should be equal to a man in  a family. Instead “she must be respected by her husband. She [a wife] has been always holding high authority in Georgia, and so it shall continue. One must to do everything so that a woman, a mother would occupy the highest grounds,” he said during the last Sunday’s sermon.

With all due respect, I don’t agree with his Holiness. To put a woman on the highest grounds, on a pedestal is to turn her to an object, that can be worshiped, respected or protected. It is to turn her into an imaginary ideal, into a perfect wife, a terrific cook, a caring mother and a passionate lover. But what if this Aphrodite from Milus does not live up to the expectations? What if she errs and what if she slips? Then she falls. Hard. And if she is lucky, she will only break her arms, and not her neck.

This year, 24 women were killed. 21 were killed in 2013. And how many silent victims of domestic abuse are there whose voices are not heard because it is too shameful for them to speak up? In 2013, there were 5477 calls to the police hot line, but only 212 of them resulted in restraining orders against abusers. Only four out of a hundred women who are brave enough to reveal their family secrets get real help. And, sadly, neither an English teacher, shot by her cold-blooded ex-husband in the broad day light at Ilia State University, or a young woman, killed by her ex, a police officer, in Zestaponi, or a pregnant woman killed by her jealous husband, or any other brutally murdered victims were one of those lucky four.

At the moment, the annual international campaign ’16 Days of Activism against Gender Violence’ is taking place all across the globe. Again, the head of the Georgian Orthodox Church sees salvation in religion.

According to him, domestic abuse happens in those families, which loose their religious path. But is it really so? On one hand, all three biggest religious doctrines are preaching love and comradeship between fellow human beings. Looking from this perspective, Ilia II might be right, and all we need is to preach Christian teachings to each and every family and the problem will be solved.

But I am afraid that the matter is more complicated than this. Scholars, looking into a relationship between various religions and domestic violence, point out to the patriarchal underlying of Christianity which endorse woman’s submission and even tolerates force, if it is seen as necessary.

Georgia, which is undoubtedly a Christian country with a strong Church influence, is not an exception. A country-wide study on domestic violence in Georgia in 2010 showed, that every second woman believes that a good wife should obey her husband, even if she disagrees with him. And almost a half, 45 %, of respondents think it is important for a man to show his wife who is the boss in a family.

The study showed that almost 7 percent woman experience physical violence. And these women, who have been physically abused, tend to justify their spouses more than those who have never experienced any kind of physical violence: 46 % and 36 % respectively. They say, that in some cases woman deserves to be punished, for example, when she cheats on him, or when he has suspicions that she might be cheating.

So, a woman might be put up high, enjoy all the respect possible, but only as long as she behaves accordingly. As adultery does not go hand-in-hand with the perfect image of a woman, she looses her respect and her man looses his temper.

But if a man is raised understanding that a woman is his equal, who neither is nor should be perfect, and a woman is raised as an equal to a man and does not see him as her superior, than there is hope of a happy ending even in an atheist family.

Luckily, Georgian women are not hapless and do not docilely wait for their turn to become another battered victim. Last week, on the first day of the annual worldwide campaign ’16 days of activism against gender violence’, women and men from 22 Georgian cities and towns came in the streets demanding to stop domestic violence. It was organized by a newly formed Georgian Women’s Movement, which has almost 5000 Facebook fans. True, a lot of them might be just passive observers, but the fact is clear – women are raising their heads up and protesting the existing patriarchal status quo.

A couple of weeks ago, a youth NGO ‘Georgian Young Greens’ on Rustaveli avenue were asking people to take a piece of paper, write down the answer to the following question: “why do you need feminism?” and pose for a picture with it. Due to a massive UNM rally that took place just a few blocks away, there were a lot of passers-by. Guess how many people got their pictures taken? Thirteen. But that is already a start.