Republicans and Georgian Dream to run as independent parties

Republicans and Georgian Dream to run as independent parties 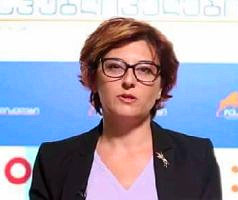 TBILISI, DFWatch–Two of the parties in the governing Georgian Dream coalition have decided to run as independent parties in the upcoming parliamentary election.

The Republican Party declared Thursday that they plan to participate in the election independently, not as part of the coalition, but the party’s cabinet members and leader of parliamentary committees will stay in their positions until the election.

Leader Khatuna Samnidze said at a briefing at the party office at 12pm that the decision offers the Georgian Dream coalition an opportunity to fulfil its goals without any ‘awkwardness.’

The statement issued by the Republican Party on Thursday reads that by this decision, the party will end ‘particularly harming and boring public speculations about internal coalition affairs.’

Today, the party begins its own preparations for the parliamentary election, Samnidze said.

“This doesn’t mean that the party immediately leaves the coalition, the parliamentary majority, the government or the city councils. We will decide those issues individually,” she explained, adding that some party members may resign in case they have their own political agenda, but this will be up to the prime minister.

Samnidze also used some strong language against Russia and what she deemed pro-Russian and anti-Western forces in Georgia, and said the party will not give in to blackmail of the kind seen recently with sex tapes published online.

Republican Party members say that as long as party members are in the cabinet they will continue carrying out the government’s action plan which was approved by the parliament.

The PM said that it is quite normal for parties to participate in elections independently and there is nothing special about it. He said that the parties of the coalition will continue cooperation before the election, but it is early to talk how they will cooperate after the election.