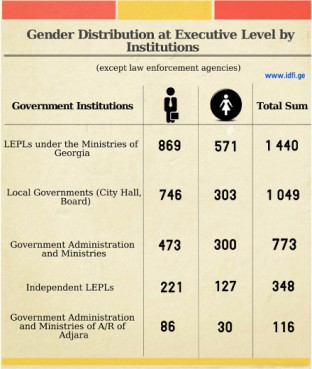 TBILISI, DFWatch–There are twice as many men as women running public bodies in Georgia, according to a new report.

The report by Institute for Development of Freedom of Information (IDFI), published on Wednesday, indicates that among 773 employees in higher positions in the government administration and ministries, there are 300 women and 473 men.

At agencies subordinate to the ministries, there are 571 women among 1,440 employees, while 869 are men.

30 out of 116 management positions in the government and ministries of the Autonomous Republic of Ajara are held by women.

Among the 19 ministers in the government, three are female: the justice minister, education minister and defense minister. The foreign minister was until recently a woman too, Tamar Beruchashvili.

The report is based on data collected in March, 2015, from public entities, excluding some law enforcement bodies.