Repeat elections in Georgia due to serious fraud

Repeat elections in Georgia due to serious fraud 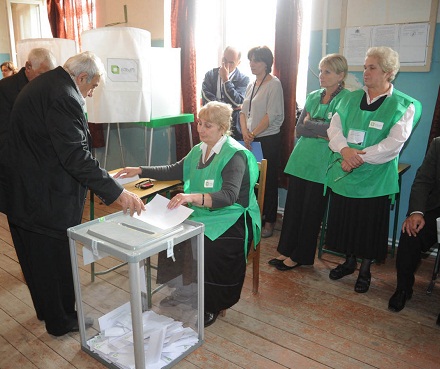 The election results were cancelled at eleven precincts, which are calling voters to the ballot-box once again today. (IPN.)

TBILISI, DFWatch — Eleven precincts in three districts in Georgia are holding repeat elections Sunday, because of grave irregularities which led to results of the October 1 parliamentary election being canceled.

All eleven are what’s called majoritarian or first-past-the-post elections and are mostly located in central and eastern parts of the country.

Repeat elections are held in Sighnaghi, Gori and Khashuri districts, the reason being that there were attempts at fraud at these precincts during the October 1 parliamentary election.

Saturday morning, it became known that Sergo Kitiashvili, majoritarian candidate for the ruling National Movement party, withdrew his candidacy. He said the reason is harassment from his Georgian Dream opponent and his supporters.

“Open aggression continues towards my members of my headquarter, and against members of the district [election] commission. I think it is impossible for me to participate under such conditions as in Khashuri. So I decided to refuse participating in the repeat election,” the majoritarian candidate for Khashuri region said.

Khashuri is a region where the majority of violations took place. October 1, special police units broke into several precincts in the district, and according to non-government organizations and observers, there were attempts at changing the results. Later a video surfaced which showed a masked man holding a pistol entering the room where the election commission was.

The election commission’s work continued, however, which led to protests by Georgian Dream activists, while NGOs demanded to have the results annulled.

The population in Khashuri will have to once again make their choice at five precincts.

Eka Azarashvili, spokesperson for the Central Election Commission (CEC), on Saturday made it clear that even though Kitiashvili withdrew his candidacy, the election will be held as planned.

“Every candidate has the right to apply to withdraw his or her candidacy, but the deadline for doing this has passed. His surname will still be on the election ballot,” she explained.

CEC warns that election campaigning is prohibited at precincts. It is also prohibited to wear t-shirts or other accessories with the logo or name of one of the election lists. Violators may be fined 1 000 lari.