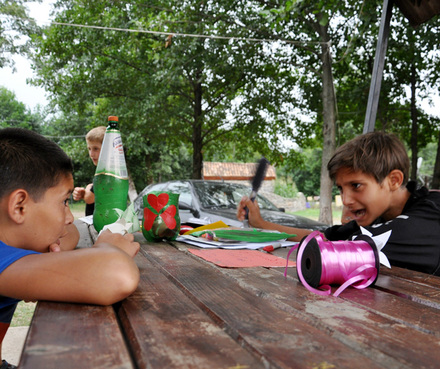 The camp in Vartsikhe brought together children of different religious background. (DF Watch.)

TBILISI, DFWatch–A ten-day summer camp was organized in mid-August for about one hundred Georgian Muslim and Christian children. The camp is aimed at making friends, train and educate, as well as breaking down prejudices about religion.

Giorgi Jaiani, 15, came to the camp in Vartsikhe, western Georgia, with about fourteen of his friends from Batumi. He has never met the other kids in the camp, who are from Adigeni, Khulo, Tbilisi, Gori and other places in Georgia. 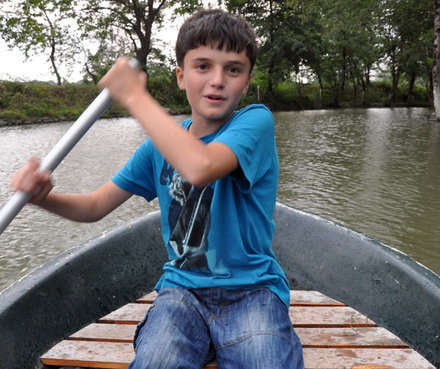 Participants could choose from courses in language and crafts, as well as sports activities. (DF Watch.)

“Today I know more than 50 kids from this camp and have perfect relations with them,” he tells us on the very last day of the camp. “There is tolerance here, we are equal, we are having fun and learn things.”

The camp lasted from August 10 to 20 and brought together kids from 11 to 16 years of age. About 35 of them are Muslims. The rest are Christian, mostly Orthodox, but Catholics also took part. 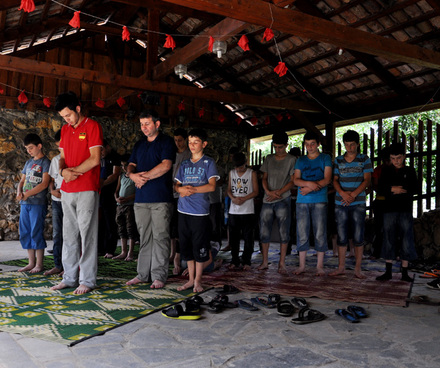 According to coordinator Zaza Mevlupishvili, the camp was organized by international Christian organizations. They first conduct seminars and training for the teachers and coordinators who will be working in the camp, and then the camp itself begins.

This is the first time there has been a mixed camp for Georgian Muslims and Georgian Christians.

“Preaching of any religion is prohibited here,” he tells us, but adds that sometime children may be invited to discuss different religious topics.

The camp starts early in the morning with different training and teaching groups, such as studying English, crafting jewelry, sport, music, dancing and drama. Each morning, the camp goers chose which groups they want to attend, and in the evening they share what they have learned or done during communal meetings in a huge white tent, where there is a stage and a dining area.

Giorgi Jaiani says he likes the crafting and English groups.

“I actually knew English before, but I’m improving here,” he tells us. “As for the crafts, it’s fun, I like it. Actually, I’d come here every year, if there were such camps.”

Mevlupishvili, who has 18 years of experience of being at summer camps, says that he has never heard there have been organized such mixed camps for children of different religions, but he remembers being with kids from Pankisi, a settlement in the northeast of Georgia near the Russian border, where Chechens are living.

“First we were nervous about how this new camp would go, how the kids would get on with each other, but everything went perfectly. There wasn’t any conflict or dispute.”

Attending the camp costs 80 lari (USD 46) and was open for every child wanting to come.

“I like the idea of this camp, to bring together Georgian Muslims and Georgian Christians. Usually Georgian is necessarily associated with Orthodox and no-one mentions that there actually are Georgian Muslims too, who are perceived as Turks or being even called Tatars and not seen as part of Georgia and Georgians.”

Mindia Shainidze, a 20-year-old student from Adigeni is wrestling trainer for 25 children he brought here.

“I received information that this kind of camp was organized and I decided to pick the best kids and bring them here. They could train and rest at the same time,” he tells us.

There are three training sessions in wrestling per day. Mindia says they are from socially vulnerable families and he trains them for free in Adigeni.

“We now train for an important competition. I decided to bring them here as there is a warm environment and the kids are happy. We train and rest and actually kids, whom we met here also got interesting in wrestling as they come to attend our trainings and even learn it,” he says.
There’s a lot of fun in the camp apart from studying. There is a pool, there is a billiard table, a place to play music. The day we arrived, a boy kept practicing playing a saxophone the whole day. He was later joined by a drummer and a guitarist. In the evening there was organized a market. Children were given their own currency called ‘Udardela’ (free of concerns) to buy ice cream, chocolate, juice or earn money by providing different services like hair cuts, boat rides, bow and arrow competition or basketball.

“This camp where I am is very good, as children with different background become friends, and so we learn that it doesn’t matter if a person has different religion. Religion teaches us that every person, no matter whether he is black or white, is no better than other and this camp teaches a lot about this,” Zaur Tsiklauri writes in a note for a camp before leaving.

Zaur Shantadze, a group leader of kids from Adjara, who also helps Muslim kids to pray every day in the camp, tells us that the camp helped Muslim kids to free themselves of complexes because of their religion, which they usually have to hide, as some people, for example at school, make fun of them.

“The children got to know each other and saw that regardless of what attitudes they had in the past (mostly negative), now saw that they are completely the same, speaking the same language, thinking the same way, play in the same way. Only religion is different, and it is not a catastrophe.”

He says people become hostile to things which they don’t know.

“We pray and there is nothing bad in it.”