Religious minorities in Georgia shortchanged due to prejudice

Religious minorities in Georgia shortchanged due to prejudice 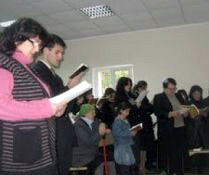 Jehovah’s Witnesses have been subject to a wave of violent attacks in Georgia. (Interpressnews.)

TBILISI, DFWatch–In the last few years, Georgia has had a surge in discrimination against religious minorities. A new report reveals that also a silent, invisible day-to-day form of discrimination is prevalent within government institutions and among public servants.

The high profile conflicts have been widely reported: The mosque in Chela, where local Muslims were denied to put up a minaret. The long postponed plans for a new Batumi mosque. The violent attacks on Jehovah’s Witnesses.

But until now, it has been poorly understood how widespread prejudice against minority beliefs is among public officials and in the legislation.

In a new report, the Tbilisi-based non-governmental organization Tolerance and Diversity Institute (TDI) writes that such prejudice leads to minorities being shortchanged when it comes to building permits, protection against crime or compensation for damage during the Soviet Union.

The surge in attacks on religious minorities began in 2012, according to Eka Lomtatidze, one of the researchers behind TDI’s recently published study of religious discrimination and constitutional secularism in Georgia.

According to TDI,  the Jehovah’s Witnesses stated that in 2012 there were 10 religiously motivated offences against them, and in 2013 this number grew to 40. Also, in the period of 2012-2013 there were several violent incidents directed towards the Muslims in Guria, Kakheti, Adjara and Kvemo Kartli.

Lomtatidze believes the reason Muslims and Jehovah’s Witnesses are singled out is that other religious minorities that were included in TDI’s survey, namely the Evangelical-Protestant Church, the Armenian Apostolic Church, the Seventh Day Adventist Church (Pentecostalists) and the Catholic Church, are not as visible in society as the former two.

Figures from the Public Defender’s Office confirm that there was a growth in religiously motivated discrimination, violence and intolerance incidents in 2012 and 2013.

According to the 2012 PDO Parliamentary report, 40 cases of religious intolerance remained without investigation in 2009-2011, and in 2012 the office received 28 complaints on the grounds of any alleged abuse of an individual’s religious rights, not only violence; in 2013 there were 56 complaints of that kind, and in 2014 so far there were 34 such complaints.

Why is there an escalation of violence towards religious minorities? “Maybe one of the reasons could be that the case of Muslims in Nigvziani when the majority of population started to obstruct the Muslim worship and the government took a position that it is a dispute between Christians and Muslims and not a violation of minority rights. Perhaps it was an encouraging message for those people who try to convert the other religious groups to Christianity, that they can go on with it,” Lomtatidze told DFWatch.

At the Public Defender Office, media coordinator Teona Gogolashvili agrees that there is a surge of intolerance against religious minorities, but says it’s impossible to confirm it by using their statistics, because complaints weren’t filed according to the nature of the complaint prior to 2012. She also points to the media focusing more on religious conflicts as a reason it has become more visible.

“Clearly, the visibility of any tensions between different religious groups has been increased after 2012 and these cases are widely covered by media. Increased media coverage and discussions in the society over the issue of intolerance towards different minority groups can be also assessed positively, as it contributes to open public debate and awareness raising as well,” Gogolashvili explained.

Religious minorities in Georgia also experience discrimination when it comes to compensation for damages inflicted by authorities during the Soviet Union, privatization of state property, establishment of the ownership of the disputed prayer-houses that were nationalized during the Soviet times, permissions to construct new religious buildings and paying taxes and customs. In addition, TDI states that there is indoctrination in the teachings of the Georgian Orthodox Church in public schools and interference in the autonomy of religious institutions.

The basis for such preferential treatment is the 2002 Constitutional agreement between the Georgian Orthodox Church and the State of Georgia, at that time represented by president Eduard Shevardnadze. This agreement recognizes the special role of the Georgian Orthodox Church in the history of Georgia; exempts the Church officials from certain taxes and from serving in the military, and promises compensation for the losses of property during the Soviet era. Moreover, it provides grounds for the Church-State cooperation regarding the public school curriculum.

Lomtatidze explained that this agreement itself would not be a problem, if other religious denominations would get the same recognition and the same treatment from the state.

In addition to the preferential legal treatment of the Georgian Orthodox Church, some politicians and officials do not follow the principle of religious neutrality, TDI writes in a  statement related to religion and religious institutions. On contrary, they provide biased views and evaluations based on their personal religious affiliation or the influence of the majority religious group.

Lomtatidze noticed that after 2009, the number of acts of violence directed towards Jehovah’s Witnesses, Pentecostalists and other religious groups, dropped. One of the possible explanations offered by her was the European Court of Human rights (ECHR) ruling in a case of Gldani Jehovah’s Witnesses congregation against the State of Georgia in 2007. Lomtatidze speculated that this decision was a turning point, after which religiously-based violence was taken more seriously by the judicial institutions and perpetrators were persecuted more thoroughly.

In the midst of the surge in religions conflict, the Georigan government this year established a new state agency on religious affairs, which was supposed to act as an advisory body to the government and allocate 4.5 million GEL of budget funding on assistance to various religious groups.

However, up to this day there is no publicly available information on the actual activities of this agency, and the officials of this agency were not willing to provide any details about their work to DFWatch and refused to answer by phone or email.

According to the Caucasus Barometer 2013 survey, published by the Caucasus Research Resource Centers (CRRC), 99 percent of Georgians consider themselves religious. 81 percent say they belong to the Georgian Orthodox Church, 10 percent are Muslims, 6 percent declared themselves Armenian Apostolics, and 1 percent as followers of other religions.

2,133 adults were questioned in the survey, which was conducted in October-November 2013.