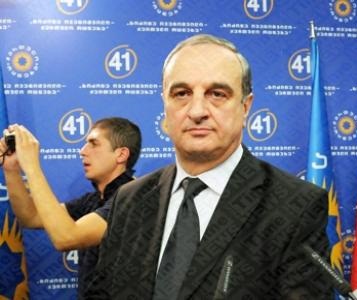 TBILISI, DFWatch — Groups in Georgia ask the new government to reconsider its candidate for refugee minister, after criticism for making racist statements.

A week ago Bidzina Ivanishvili presented his list of names for the future government. One of them was Davit Darakhvelidze, majoritarian candidate in Ambrolauri district, who was handed the post of refugee minister.

In a video recorded during the election campaign he says that many foreigners including Indians, Chinese and African Americans have become Georgian citizens, but that he wants ‘Georgia for Georgians.’

A bit later pro-government online television posted another video in which Darakhvelidze assaults a journalist and threatens her for asking inappropriate questions.

His candidacy is controversial and is being discussed on social networks, while nine non-government organizations published a statement where they ask Bidzina Ivanishvili to reconsider Darakhvelidze’s candidacy.

The organizations express concern about his alleged hate speech and racist statements during the election campaign, and accuse him of having had an aggressive tone while interacting with the media.

“Those expressions contradict European values and the Euro-integration course, which is Georgia’s declared foreign policy course and it violates basic human rights and freedoms,” the statement says.

They want a review of Darakhvelidze’s candidacy and ask the incoming prime minister to be more careful when picking candidates for his future government.

On Saturday, Bidzina Ivanishvili responded to the NGOs through his official Facebook page writing that he welcomes this response and the trend to involve society in the process of appointing a new government, which he thinks is a healthy process.

He drew attention to Friday’s talk show on Maestro TV when Dalakhvelidze was invited for a talk, where he answered questions regarding different issues.

“If the explanations of Davit Darakhvelidze weren’t enough for the civil sector I am ready to hold discussions together with the candidate for minister and the non-governmental sector and listen to their views and proposals,” he writes.