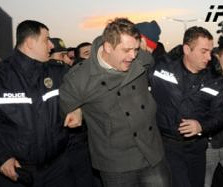 TBILISI, DFWatch–Five people were detained during tumults outside the Saakashvili Presidential Library in Tbilisi on Friday.

Inside the building, activists for the National Movement held an exhibition dedicated to the one year anniversary of the revolution in Ukraine.

But outside, the youth organization Free Generation, which is known for organizing protests against the National Movement around the country, brought eggs and red paint and threw them at the library building.

The red paint was to symbolize the bloody regime that Saakashvili ran, one of the demonstrators explained to Maestro TV.

The rally participant said they had come to protest the ex-President Saakashvili’s interference in Georgia-Ukrainian relations.

Lado Sadgobelashvili, one of the group’s most high profile members, said before he was detained that Saakashvili is ‘interrupting’ Georgia’s relations with Ukraine.

“His library is actually a nest for the National Movement,” he said.

A week ago, Saakashvili was appointed head of a council advising the Ukrainian president about reforms, even though the former leader is charged in several criminal cases in his home country. The appointment led to a diplomatic row between Georgia and Ukraine.