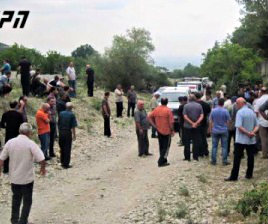 People blocked the road for employees of Canargo Georgia which is exploring for oil in Sagarejo. They don’t want to lose their water supply. (Interpressnews.)

TBILISI, DFWatch–Locals have rebelled against an oil company that wants to search for oil in an eastern Georgian town. People fear that they may lose their water supply.

On Wednesday, they blocked the road for employees of Canargo Georgia and didn’t let them into the building from where the water is distributed, according to local news agency International Center of Kakheti.

Canargo wanted to do oil exploration work close to the water distribution facility and people became concerned that they would be left without water.

Locals say the company promised them on Tuesday that they wouldn’t start drilling at least on 300 meters away from the valley from which water is distributed, but it turned out that the company plans to do blasting work in the valley to look for oil, without telling them about it.

“There were seven cars, three trucks with compressors for digging,” one of the participants at the rally said. “About a hundred people came and didn’t let them in.”

Locals also claim that if there is an explosion, this may leave more than ten thousand households without water.

Canargo Georgia has been working in Georgia since 1996. The company has not yet commented about the rebellion among locals in Sagarejo but says it plans to publish a statement in a few days.

Sagarejo people first demonstrated against Canargo Georgia in the end of May. Member of Parliament  Tina Khidasheli from the government coalition promised them then that she spoke with company representatives and was informed that they would stop work there until the end of June and carry out a study to determine how to preserve the water supply for villagers and safely continue work or otherwise provide an alternative water supply for them.